Ubuntu 12.04 will Focus on Power Users, Efforts to Bring Ubuntu to Phones,Tablets and TVs by 14.04 LTS 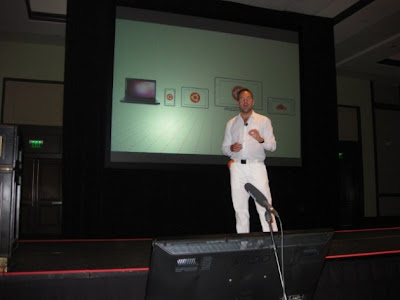 In opening keynote address of Ubutnu Developer Summit (UDS), Mark Shuttleworth said that lots of efforts will be put this cycle to make Ubuntu more power users friendly. Emphasis will be on improving multi-tasking, multi-monitor support and other features for power users.

With 12.04 LTS, the support will also be extended to 5 years which has been 3 years until now for LTS releases. Also a more streamlined desktop experience will be delivered to corporate users who deploy Ubuntu at mass scale.
Mark also talked about some plans for the next 14.04 LTS release, due in 2 years. He said that there will be efforts to deliver the core Unity platform to a range of devices that include smartphones, tablets and TVs.

Unity, the desktop interface in today’s Ubuntu 11.10, was designed with this specific vision in mind. While the interface for each form factor is shaped appropriately, Unity’s core elements are arranged in exactly the way we need to create coherence across all of those devices. This was the origin of the name Unity – a single core interface framework, that scales across all screens, and supports all toolkits.

We have also invested in the design and engineering of Unity, motivated by the belief that desktop interfaces would merge with mobile, touch interfaces into a seamless personal computing platform in the future. Today we are inviting the whole Ubuntu community – both commercial and personal – to shape that possibility and design that future; a world where Ubuntu runs on mobile phones, tablets, televisions and traditional PC’s, creating a world where content is instantly available on all devices, in a form that is delightful to use.

Our engagement with the PC market will help bring the results of this work to a huge audience – partnerships with the likes of Dell, HP, Asus, Lenovo, Acer, IBM, Vodafone and more are a gateway to users who want continuous, connected, cross-device computing.

The investment we have already made in the interface accommodates the touch scenarios required in some form factors and, with a little love and attention, will work equally well in mouse, keyboard or stylus-driven environments. Ubuntu will not be restricted to small screen or large screen environments but encompasses both and all the form factors in between. We will see our work on the Ubuntu platform land in a variety of formats current and yet to be invented. It is without doubt the most exciting phase in the history of Ubuntu.

The Best Ways To Use Tech In Your Business